Floor heating started the fire that resulted in the deaths of three children in Levi, Kittilä

In the early hours of the morning of 12 April 2019, a rental cabin caught fire in Levi, Kittilä. Three children died in the fire. The Safety Investigation Authority, Finland, has investigated the fire in co-operation with the police.

An area of around one square metre in the living room was identified as the starting point of the fire. 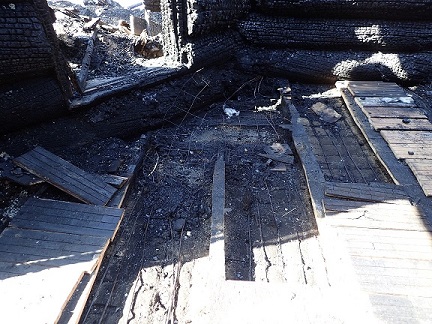 
- The electric floor heating under the floorboards started the fire. Mistakes had been made in the installation of the heating cable. The cable had been bent too tightly and attached in a manner that damaged the insulation of the cable. The damage caused a malfunction in the cable, and it ignited the wood in its vicinity, states Kai Valonen, Investigator-in-charge.

The living room was a high, open space, so the smoke rose directly upstairs. All of the children who died in the fire had been sleeping in the one upstairs room.

The child who was sleeping downstairs woke up to the fire alarm and quickly called the emergency response centre. The child managed to get out, but there was no possibility of saving those sleeping upstairs. There are no indications of the children attempting to escape the fire. In an investigation of a fire in a terraced house in Raahe in 2016, it was found that children are much less certain to wake up to a fire alarm than adults. Additionally, the gases generated already during the initial phase of the fire could have rendered them unconscious.

The first rescue unit arrived on the scene 13 minutes after the beginning of the emergency call.

The cabin occupants had rented the cabin for a week for a holiday trip, so the safety requirements and practices of the rental cabin business will be examined as part of the investigation.

- In Finland, there are a lot of rental cabins where the number of beds has been maximised with various upstairs spaces and lofts. Unfortunately, in a case of a fire they may easily become deathtraps. It may be practically impossible or difficult to escape through the windows. The fire and escape safety of rental cabins must be improved. You cannot compromise safety, emphasises Veli-Pekka Nurmi, Executive Director of the Safety Investigation Authority.

The investigation report including safety recommendations will be completed in late autumn 2019.

More about the subject

Back to top |
Print